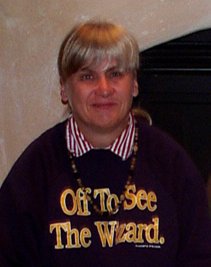 I’m an anthropologist by training, a programmer by avocation, and a manager by necessity. My husband and I have owned and operated a small plumbing repair shop since 1979. I started programming in 1985, when I bought my first PC for the business. The first thing I discovered was that computers weren’t quite as obscure as I’d thought they were. The second thing was that nobody in town wanted to create a ‘simple’ database for the business. So… I did it myself.

I fell into Compuserve in 1989 and soon discovered a ‘virtual pub’ where professional programmers gathered to talk shop after work. I joined the study group in CLMFOR shortly after it started, and over the years I gained a quality education in software engineering. (As far as we know, ours was the first on-line study group, although the idea has obviously spread widely since then.) I still keep up with many of the people from that group, although we’ve moved on from CompuServe to other homes on the web.

I started writing professionally in 1995, when I sold my first article to Windows Tech Journal. I wrote a regular book review column for Visual Developer Magazine for many years, and I’ve freelanced for other publications.

I was a member of Gerald M. Weinberg’s year-long 1996 Software Engineering Management workshop. One of my proudest career moments was when I was invited to submit a chapter for the book The Gift of Time, in honor of Jerry’s 75th birthday.

My main professional interests are database design, and software engineering and management. I’m currently acting as SysAdmin and general “GoFer” for our small OSX/Linux network. I do everything from the general SysAdmin tasks, to firewall monitoring & network security, database design & administration, business programming analysis, design & development, website design & development. I’m the local SEO/SEM expert, and of course I handle many of the monthly accounting tasks. I use Ruby on Rails, and the Elastic Stack. I’m rather cautiously eying Splunk and Docker. I dabble occasionally in nmap and other commandline goodies. I’m relearning various flavors of Linux after several years away.

On the personal side, I started milling my own flour and making most of my own bread and pasta a few years ago after a series of health scares suddenly made nutrition REALLY important. I’ve gardened casually since I was a teenager, doing summer chores in the family garden. A few years ago I started getting serious about growing my own tomatoes and squash, herbs and flowers. I’m now learning about raised bed gardening in the local micro-climate.

I… keep myself busy.