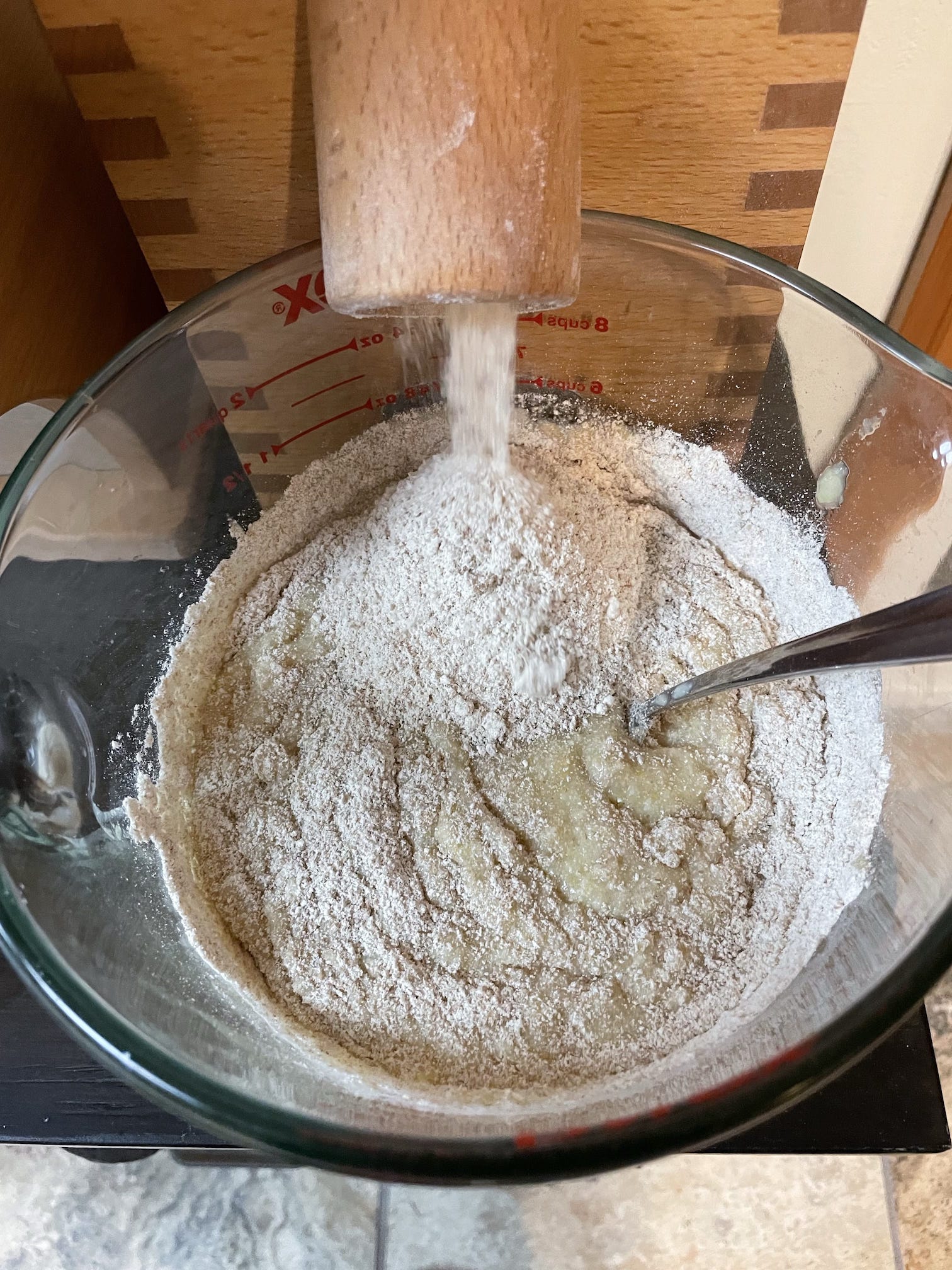 OK, so the word “poison” is obviously hyperbole. Nobody is being deliberately, maliciously harmed here. And obviously, the roller mill, which was developed in the mid 1800’s, is very efficient. It’s wide-spread adoption quickly allowed just a few regional and national producers to replace many thousands of local stone-ground mills. It turned the many local grain economies into a few centralized national and international systems where flour became a commodity: cheap, standardized, and easily available. Arguably, that change has saved many lives over the decades since then. However, it has had costs as well, social, economic, and nutritional costs that nobody could have predicted at the beginning of the change.

The ascent of the roller mill affected the local farmers and bakers as well as the millers, and its hungry maw soon replaced the many locally-optimized grain varieties once grown in this country with just a few types nationally available. It created a biological monoculture as well as an economic one. Of course, that has environmental costs, and risks a major disruption if and when a biological threat appears that threatens the dominant grain variety.

A modern roller mill produces white (and so-called wheat) flour that is shelf-stable and that can be kept for years without spoiling. This flour won’t spoil under normal storage conditions because it’s dead - there isn’t enough actual nutrition left in it to keep anything alive long enough to cause spoilage. The roller mill functions by slicing the germ (the baby seed, where most of the nutrition is) and the bran off the wheat berry, leaving behind the white endosperm to be ground into flour. The endosperm contains the sugars and the proteins that will combine with water to form the gluten for fluffy modern bread. The germ contains the oils and most of the nutrition, and it goes rancid quickly. Much more efficient and profitable to separate it and use it for animal feed.

Even so-called “whole-wheat” flour is usually just the roller milled white flour that has had a bit of the bran added back. And they usually don’t tell you what part(s), or how much, or how it was combined. Instead look for the phrase “stone-ground”, from a reputable miller or seller. “Stone-ground” flour has been milled in one piece, which smears the germ and the bran into the endosperm as it’s being ground into flour. So even if you buy stone-ground “white/sifted” flour (why would you, though?), it’s probably got some of the germ included.

Since I started buying wheat berries and milling my own flour, in late 2018, we’ve found that we really can’t eat commercial commodity flour any more. It spikes our blood sugar and makes us feel a bit light-headed and crappy after eating. My flour doesn’t do that. It can be a bit more difficult to get fluffy products out of whole-wheat flour, but it is possible. And the health and flavor benefits are well worth it, for us at least! My husband says you haven’t lived until you’ve had a 100% whole wheat waffle, made from freshly-milled Sonora wheat, light and fluffy, steamy with butter and maple syrup. Gack, I’m getting hungry again! :-)

I own a Komo electric mill and am very happy with it. The Mockmill brand is also quite popular and I know several people who are happy with their NutriMills. Ask around the various milling groups online and you’ll get lots of advice! (I’m volunteering as an assistant admin on a Facebook milling group, “Milling Whole Grain Goodness”. We’d be pleased to have you join us!)